How Much Does Window Cleaning Cost? 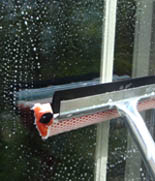 Bringing the windows to a greater state of cleanliness, is normally priced one of two ways. Either by the pane or by the square footage of the house. With a gamut of factors involved.

A 1,200 square foot to 2,000 square foot house is in the range of $95 to $180, based on standard features and leaning towards the single-story level. The 2,100 sq foot house, and starting to bring in other cost variables, averages $215 on up. Although obtaining a square footage quote is normally informal and received over-the-phone.

The price per pane is the most frequently used method to estimate window washing. This type of price quote has much to do with the company doing the service along with the part of the country that the windows are being done. Regions such as cities may incur higher amounts as well.

Specifically, the types of windows and their count will almost always be figured to arrive at the bottom line proposal that is itemized. Realizing that prices per pane are just that - single panes, on both sides, contained by a glazed border/frame.

Horizontal/Vertical Sliders - overall these are about the most convenient to clean, particularly if the outside portion of glass can be made accessible by the cleaner while standing from the inside. This feature makes prices approaching $3 to $5 per pane on the low end feasible, but quotes often surpass this.

Casement Windows - the side by side (a dual left-right combination) may offer access to the 'other outer side' -- and if it does there can be a price advantage. Though casements might be taller and require access from the outside, given the various opening angles and dimensions, $4 to $8 and sometimes greater are paid.

Double Hung Style - the age of the double hung windows will usually end up bearing upon the cost, since the older wooden types, found in victorian houses, for example, do not glide freely with occasional rope movement issues. However if these are newer vinyl, they may even tilt for ease of cleaning. Best case, double hung prices that compare with horizontal sliders, possibly even down to $2.50. But in the event that a seperate setup is required, it could amount to three times this at higher levels.

Garden Windows - these usually require an exterior setup and also some amount of clearing away on the inside. While garden windows often contain sliders, they generally have a deeper reach and/or shelving, with smaller ones around $7 on up but the larger ones, with deeper shelves, could easily be $9 to $12 ea.

Fixed Panes/Picture Windows - always require a seperate setup from the exterior. Also, they tend to be made and installed to fill larger areas for breadth of view. As such, paying more than $10, and even topping $15 for the large dimensions, again both sides, is not unheard of.

French Glass - the divided areas of glass, sectioned into small squares, could come at $1.25 to $1.50 each, perhaps not much less, depending on their condition and number.

Geometric Shapes - costing these depends entirely on the given window, because of their unusual shapes and non-right angle corners, for example the half-oval shapes.

Transom Windows - prices for these small fixed windows depends mainly on their location since little effort is involved.

Glass Block - often at the basement-level, blocks are normaly set in a cementious grid/border. These rarely need washing given their distortion glass. If cleaning down in a window well it may mean pulling and replacing a plastic weather bubble that may also need clensing on both sides. Ten dollars a piece is a starting point.

Skylights - besides gaining access on the inside, usually up through a narrow and higher temp nook, and also on the outside of the home, climbing the pitch of a roof, their shapes are at times found to be molded bubbles, if not flat. For the inside alone, $20 to $35 excluding raised areas such as foyers and vaulted ceilings that might require an extension ladder. For the outside alone it would be more than this. But combined, $45 to $60 with a price break could prove to be reasonable. Mold and mildew removal would likely be an additional charge.

Stained Glass - might have to be cleaned seperately and by a pro who knows stained glass, if it is not sealed by two clear panes.

Looking at other variables, that help sum the total price: